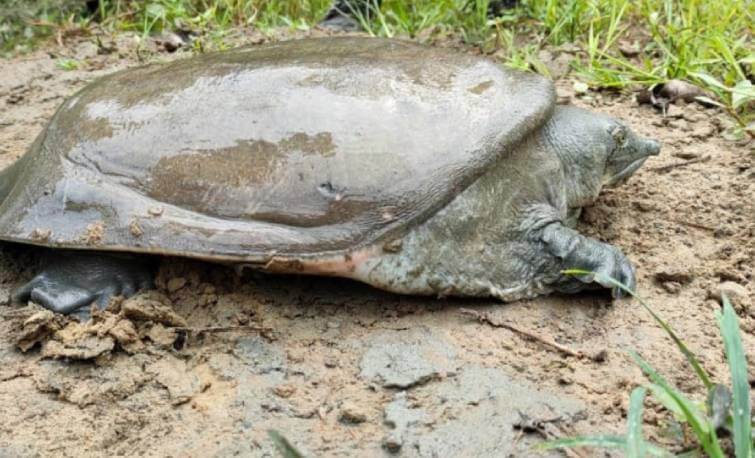 As per a study published by the researchers from Aaranyak in the Journal of Threatened Taxa, a black softshell turtle (Scientific name: N. nigricans) has been found in Manas National Park, Assam. The turtle has been found in a stream of the Pahumara River, a tributary of the Beki River that merges into the Brahmaputra in the Western Assam.

The evidence of sighting has further proved the distribution of black softshell turtles in the Kaziranga-Orang Riverine protected area. Earlier, the species was found in Kaziranga National Park, Nameri Tiger Reserve, and Pakke Tiger Reserve and several temple ponds in Assam and Tripura.

Before the recent sighting, as per the researchers, some juvenile black softshell turtles were also found in streams that flow through the Manas National Park. The recent finding also demonstrates that the species is present in protected regions besides those listed above, expanding the population's coverage in protected areas.

The study also mentions that “The population of this species might be affected given the above threats over the last 2-3 decades. Systematic efforts are needed to study and monitor this species to understand the ecology, food habit, and conservation threats associated.”

Overfishing, turtle catching for food, and substantial siltation of riverbeds (caused by landslides and mining in the Bhutanese hills) pose threats to turtles and their ecosystems in and around the Manas National Park. Extreme egg collection for local consumption is just one example of the extensive exploitation that the turtle is subjected to.

According to experts, there is still much to learn about its range and its habitat and ecology. Giant rivers and marshes are home to this daytime large softshell turtle. As per the researchers, to understand the ecology, feeding habits, and conservation problems linked with this species, systematic study and monitoring are required.

Other Interesting Blogs to Read

When did the black softshell turtle go extinct?

Before 20 years in 2002 the black softshell turtle was declared extinct.

Where is black softshell turtle found?

It is mainly found in Assam and Tripura in India and Chittagong and Sylhet in Bangladesh.

Why are black softshell turtles extinct in the wild?

Overfishing, turtle catching for food, and substantial siltation of riverbeds (caused by landslides and mining in the Bhutanese hills) pose threats to turtles and their ecosystems and that’s the main reason the species are extinct in the wild.