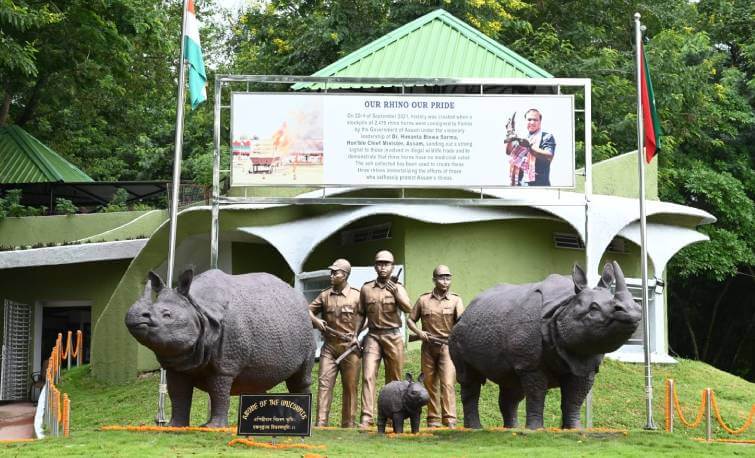 Kaziranga Gets Three Rhino Sculptures Made of Burnt Horns Ash

The interesting facts about the rhino statues are:

Kaziranga Field Director, Jatindra Sarma said this one-of-its-kind move has been taken by the authority to immortalise the efforts of people who constantly and selflessly protect the pride of Assam, the one-horned rhino. He also said that it is the aftermath of the discussion held last year between Assam’s Chief Minister, Himanta Biswa Sarma and the Chief Wildlife Warden, MK Yadava on how the ash could be used as it cannot be preserved.

Jatindra Sarma also mentioned, “Through this memorial, a message was also sent to the international community that rhino horns were burnt in Assam. The horns have no medicinal value. As such, there shouldn’t be any poaching. Let them live freely.”

The statues are kept in the open so that tourists can get a clear view of them. Rhino poaching activities have come down drastically after 2016 with the constant efforts made by the park authority and the state government.

If you are also interested in doing these activities in Kaziranga, follow us on social media or our blog to know more.

How many rhino sculptures are unveiled in Kaziranga National Park?

Three rhino sculptures along with three statues of forest guards have been unveiled in Kaziranga National Park.

Who unveiled the rhino memorials?

Chief Minister of Assam, Himanta Biswa Sarma along with Sadhguru Jaggi unveiled the memorials on September 24.

Which materials have been used in the making of rhino memorials in Kaziranga?