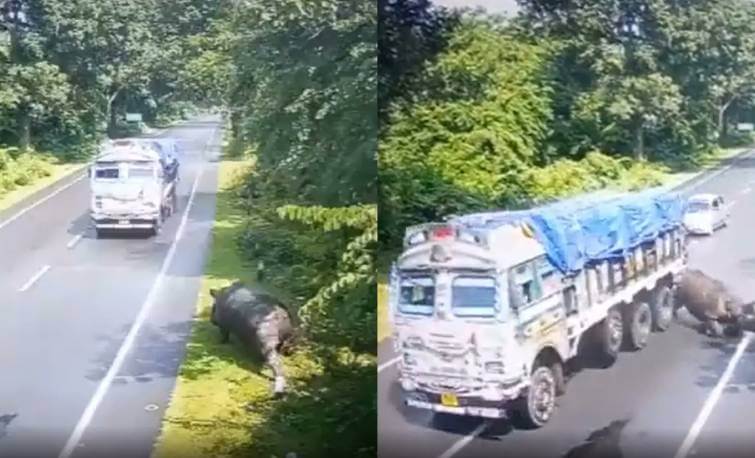 On Saturday, October 8th, a rhinoceros was hit by a truck in Assam's Haldibari Animal Corridor.

A shocking video has been doing rounds on social media platforms shows how a rhino in Kaziranga was hit by a truck. The next day, Assam’s CM posted the video on his Twitter account and informed all that the rhino had survived. He also said that the truck driver has been heavily fined by the Kaziranga forest authority as the truck has been intercepted in the Bagari area, Nagaon District.

Reportedly, as per a forest official, the truck was speeding at 52 kmph whereas the limit was 40 kmph in the forest corridor.

The viral video, which also has been shared by Assam’s Chief Minister Himanta Biswa Sarma on Twitter, shows that the truck tries to avoid hitting the rhino by suddenly changing lanes, but is unsuccessful in doing so. After being struck by the truck, the rhino attempts to get off the road by standing up, but it falls again. The rhino leaves the road on its second attempt while clearly injured.

Himanta Biswa Sarma, Chief Minister of Assam said that “Rhinos are our special friends; we’ll not allow any infringement on their space.” He also said, “In this unfortunate incident at Haldibari the Rhino survived; vehicle intercepted & fined. Meanwhile in our resolve to save animals at Kaziranga we’re working on a special 32-km elevated corridor.”

The unfortunate incident happened in Haldibari Animal Corridor, a crucial part of Kaziranga National Park in Assam, which is famed for being home to 2,613 one-horned rhinos, the largest population in the world. As per the latest census released in March 2022, the population of one-horned rhinos has increased by 200 in the past four years.

Last month, Chief Minister of Assam, Himanta Biswa Sarma along with Sadhguru Jaggi Vasudev unveiled three rhino statues at Kaziranga National Park made of burnt horn ash. After unveiling the statues, CM and Sadhguru undertook a jeep safari in Kaziranga after sunset, which instigates conservationists as the safari timing violated Wildlife Protection Act, 1972. According to them, it could have posed a threat to the wildlife inside the park.

Here are some important things to keep in mind while driving through wildlife conservation areas: