The Year of 2017 for Kaziranga National Park

Recognized as a world heritage wildlife site by UNESCO, Assam’s Kaziranga National Park one of the popular national parks in India has been on the news for the devastating two flood incidences that hit the monsoons of 2017 leaving 85% of the park submerged. This lead the park to lose 401 animals, out of which 361 including 31 one-horned rhinos and 9 elephants were killed due to a massive flood. In addition, the park also lost a tiger, 8 buffalos and 16 sambar deer during the 2017 floods but the biggest casualty was the death of hog deer, where 282 died during the flood and 14 were roadkilled in the national highway 37 that pass the 430 sq km out of 884 sq km park.

The death tolls of one-horned rhinos were the highest in the past three years mainly due to floods. Nonetheless, poaching was also one of the prime reasons for the death of one-horned rhinos in KNP that killed summed up to 8 rhinos on 26 December last year. The reason being the ivory that could fetch multi-million dollars in clandestine international markets. However, due to the intensive wildlife conservation measure taken by the KNP wildlife authorities to protect the beautiful one-horned rhinos, there has been a steady rise in rhino population from 1,855 in 2006 to 2,401 in 2015. The year of 2017 is noted to be relatively safe for the species from poachers as compared to other past events.

Kaziranga National Park, located alongside the banks of Brahmaputra annually receives 222 mm of rainfall rejuvenating the unique ecosystem. Here the grassland, ponds and swamps make an ideal refuge for the wild animals like elephants, rhinos, deer, leopards, tigers, wild buffaloes. But the seasonal harsh floods of Assam constantly puts animal lives in danger which forces them to find a rescue spot in the nearby foothills ultimately exposing them to poachers and roadkills. Such instances had taken place in the year 1988 when more than 1,000 animals perished in Kaziranga. Likewise, in the years between 2002 and 2017, a total of 130 rhinos died in Kaziranga floods.

Often the annual Assam floods and rhino poaching makes the wildlife headlines of Kaziranga. The wildlife department, however, has been taking serious protecting steps since long, especially after the 2017 flood. So let us see some of the bittersweet incidents of 2017 that brought in some good and bad news for one of the beloved National Parks of Assam Kaziranga. 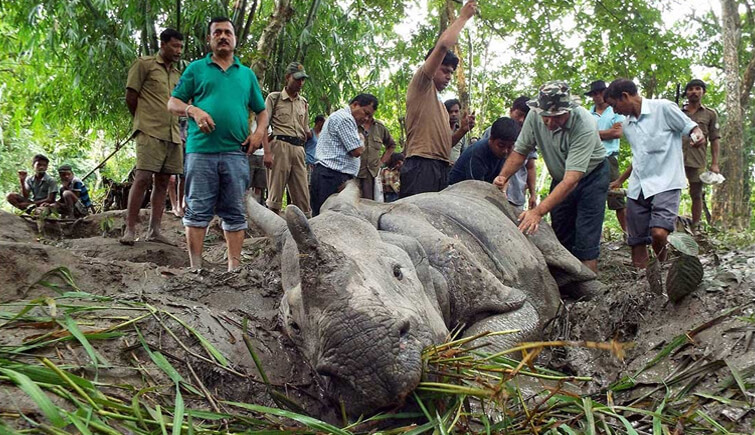 January - April: With the beginning of the year 2017 in January, a rhino was poached near the southern part of Kaziranga in Nagaon district with a missing horn. The forest officials found six empty cartridges of 303 rifles near the carcass of the dead rhino. As per Govt. one of the reputed news channel BBC was banned from further making documentary films and showing false facts on Kaziranga due to their controversial film named 'Killing For Conservation'. The film exposed the ‘ruthless anti-poaching strategy’ that allowed the guards to shoot the trespassers at night in order to protect the rhinos. Earlier in march, a freshly-removed rhino horn was discovered from a car crash where 3 Manipuris were killed. In the month of April, the Assam police seized a man near Biswanath Ghat forest range of Kaziranga National Park along with a tiger skin and bones.

May - October: In the past six months from May to October, there have been 10 attempts made by poachers to enter Kaziranga National Park where they were successful to enter twice. These incidents occurred during the monsoon off-season when the national park remained closed. However, these six months were gravely affected not just by massive floods but poaching as well. Where the incidents did not confine to rhinos only as in the month of June, five poachers were arrested for smuggling tiger skin that they confessed having killed inside the park in Manas (another prime wildlife attraction in Assam).

November - December: Rhino poaching is a serious environmental crisis and there have been major protection acts enacted by the wildlife department. However, on 2nd November, 3 rhinos including two female rhinos and a calf were shot dead in the Burapahar range of Kaziranga National Park. The poachers used an AK-47 rifle for the act which was later discovered from the empty cartridges found on the ground by the security personnel. Yet, in the same week, another rhino was killed for ivory near the Kahara range of Kaziranga accompanied by one more encounter of a carcass of 10 years old rhino in Bagori range on 22nd December. However, the various protection act in Kaziranga diverts the poachers to other wildlife parks of Assam to Orang National Park and Royal Manas. There were a few poaching news from these national parks in the year of 2017 as well.

Such incidents have been triggering the wildlife department for the safety of Kaziranga thus monthly meeting to check the efficacy to protect rhinos from poaching was called by. This act was conducted by Chief Secretary V.K. Pipersenia along with other forest officials that started from November last year. The park also uses drones to monitor activities thus, during the massive Assam floods, drones were made of great use locating the injured or lost animals. Earlier in June, three drones were used by the park authorities to monitor on the movement of animals during flood so that precautionary measure can be taken for their safety. On December 28, a team of Nature Care and Tourism Education Foundation spread awareness in 29 states of India against rhino poaching for three months. In order to deal with rhino poaching, four new Belgian Malinois dogs along with the already existing two dogs have been kept in Kaziranga to assist in anti-poaching operations. With that, one member of Super Sniffer Force was also deployed in December at Kaziranga National Park. 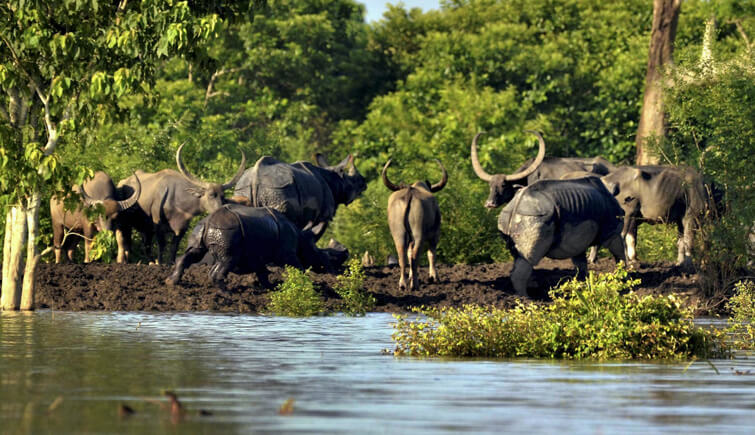 May - September: The National Park experienced a tragic monsoon flood after three decades in 2017 killing more than 401 animal species which included 31 one-horned rhinos, 9 elephants and 361 other wild species. The year 2017 also witnessed a devastating loss of hog deer where more than 282 members were lost during the monsoon season. The scarcity of food remains a major wildlife problem since almost 50 percent of the entire park gets submerged. Besides the animals in the park, even the locals living amid the protected area of KNP faced major difficulty during the high rise monsoon flood. 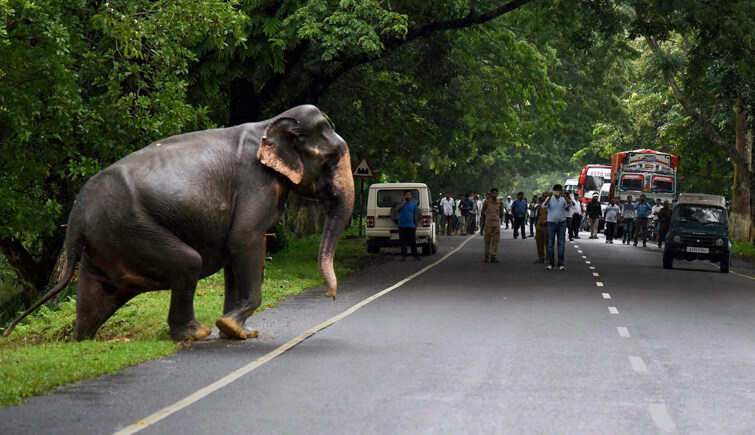 With the monsoon floods barging in Kaziranga, the animals are forced to flee to the upper grounds towards the Karbi Anglong Hills crossing national highway 37 making them prone to road accidents. Since 430 sq km of the park is located on the national highway 37 many incidents are witnessed. During the monsoon flee to the higher ground south of the park, around 14 hog deer faced road accidents speeding vehicles on the national highway in 2017. The Assam government has also put a speed limit of 40 kmph on vehicles plying on National Highway-37 in order to avoid distressed animals looking for safety in the neighbouring Karbi Anglong Hills from being hit. The violators can be fined up to 5000 if the rules are not followed.

One of the famous wildlife destinations Kaziranga National Park went through a series of ups and downs in the past few years and hence wildlife act has been seriously taking care of the protection and conservation of the loved wild creatures. This park has successfully outgrown in the conservation of rhinos from having mere 75 in 1905, to a steady rise in the population to 2,401. Having a unique ecosystem of grassland, ponds and swamps these parts receive 222 mm of rainfall annually thus offering a warm environs for species like elephants, rhinos, deer, leopards, tigers, wild buffaloes and hippopotamus.