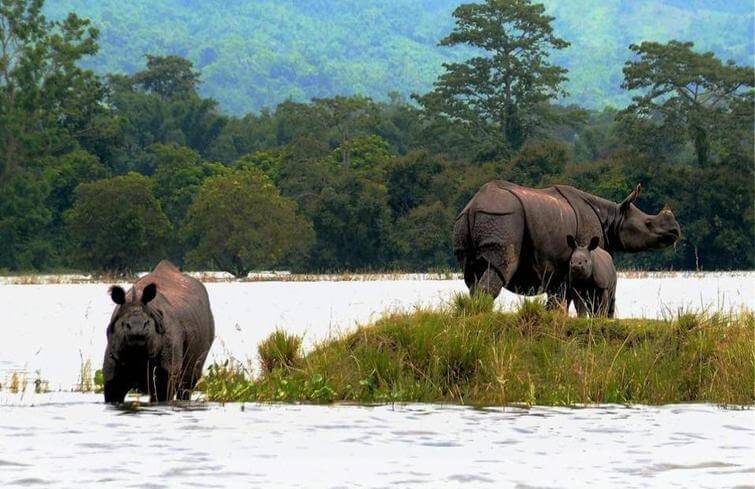 In Assam, the flood situation turned worse with flood water inundating 20 out of 32 districts of the state, affecting over 12.55 lakh people spread across 2,053 villages under 67 revenue circles. Whereas, the death toll rose to 30 as per the report by the Assam State Disaster Management Authority (ASDMA), when seven more people killed on Monday due to the continuous rise in the water level of Brahmaputra, which was already flowing above its danger mark.

The worst affected place being Lakhimpur district, where red alert has been declared by the administration, when huge quantities of water has been released from Ranganadi Hydel Power Project of the North Eastern Electric Power Corporation (NEEPCO) in Lower Subansiri district in Arunachal Pradesh, for the protection of the dam structure. Since Sunday night, the NDRF and SDRF personnel rescued about 1100 people, who were stuck in flood caused due to the water released by NEEPCO. The situation in the neighbouring Dhemaji district has too become severe because of the incessant rains in the upstream regions of Arunachal Pradesh.

Around 71 relief camps by the state Government, are operating now in ten of the most-affected districts, taking care of more than 20,000 flood affected people. And thousands of people have moved to highlands because of unavailability of the basic needs. Even the roads, bridges and other infrastructure have been breached by floods, including NH 15 that links the Lakhimpur and Dhemaji districts along with six other Arunachal Pradesh districts, and NH 2 and NH 37 that has cut off Manipur from rest of the country. Click here to know more about Kaziranga Park.

About 70% of the Kaziranga National Park, the UNESCO World Heritage Site in Assam is submerged in flood waters, causing the animals to migrate to the highlands inside the Kaziranga National Park, while animals like wild Buffaloes, Deers and Elephants move to the higher grounds in Karbi Anglong, crossing the National Highway-37. The forest authorities have flown in drones to keep a watch on the movements of the animals, to ensure for their securities. Whereas, the forest guards have begun boat patrol, and keeping a strict watch on the border of the park, especially during nights, to secure the animal who are now easily exposed to the poachers.

On Monday, Assam Forest and Environment Minister Pramila Rani Brahma visited Kaziranga National Park and took stock over the flood situation. She was informed by the forest guards about the carcass of a rhino that died in floods, and around six deers were knocked down by the vehicles on the highway, while escaping from floods. So now, the speed limits on vehicles plying on National Highway-37 have been restricted to 40 km per hour, by giving time-cards to vehicles upon entry, and are checked on exit. If found to have violated the speed limit, they are fined with up to Rs. 5,000/-. Brahma praised the efforts of the forest staff and the members of local Eco-Development Committees (EDCs) for joining hands with them in safeguarding the park animals.

On Sunday, Prime Minister Narendra Modi called up Chief Minister Sarbananda Sonowal to take stock of the flood situation and measures are taken by the State Government to look after the misery of the flood-affected people, in every way possible.