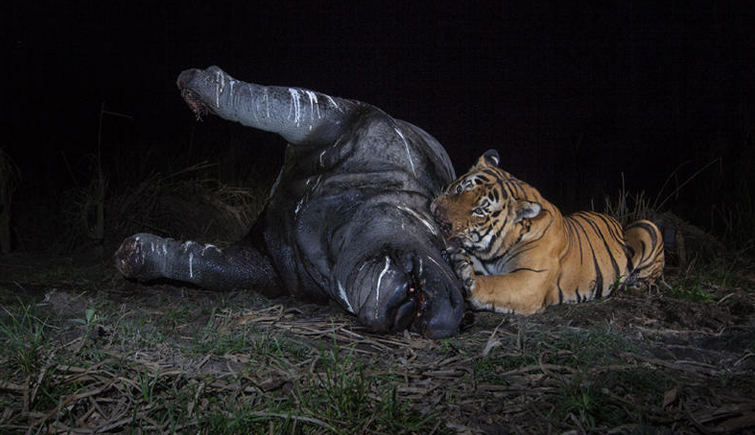 A Royal Bengal Tiger and a Rhinoceros Found Dead in Kaziranga

After the terrible incident of losing three one-horned rhinos in three days in Kaziranga, the park again mourned the death of one more rhino and a Royal Bengal Tiger. However, this time the reason for the death is not poaching but a brawl between the two animals which unfortunately lost their lives in the fight. The carcasses of the two animals of endangered species were found lying next to each other on Tuesday, Nov 7, 2017, by the forest officials in the Bagori Range of the park.

The forest officials suspect the reason to be the fight between the two animals on the account that the rhino’s horn and the body parts of the tiger were intact. While the dead tiger is said to be a sub-adult male of about two-and-a-half-year, the rhino was a female of around 20 years. According to officials, another possible reason of the death of the animals could be that an adult tiger might have killed the rhino, and the sub-adult tiger strayed into the adult tiger’s territory and eyed a share of the rhino meat, reluctant to share, the older tiger might have killed him as well. The officials suggest this theory after finding fresh tiger droppings close to the two carcasses.