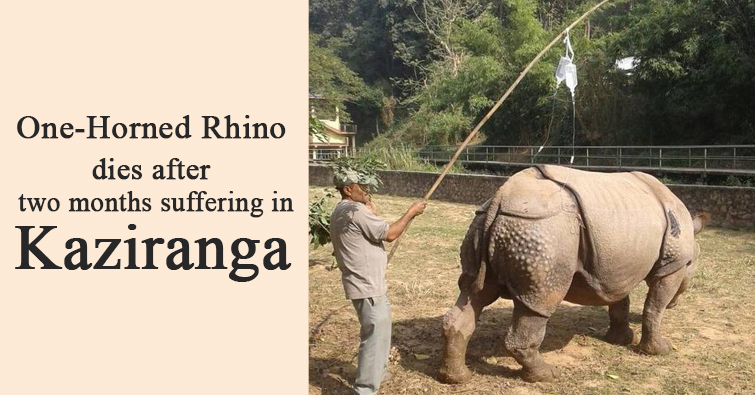 One-Horned Rhino Dies after Two Months of Suffering in Kaziranga

Sadness has taken over Kaziranga once again with bidding goodbye to one of the One-horned Rhinos, Bishnu on January 8. The reason for his death revolves around his feeble health caused by diarrhoea which was later followed by tooth decay issues. Bishnu started facing health problems in 2016 when he suffered from diarrhoea leading his rectum to surface on the exterior parts of his body. Bishnu, the 33-year-old rhino went through a painful operation to reinsert the rectum, however, in his later stage, he faced tooth decaying and developed defecation again leading in difficulty to eat. Thus, the wildlife team in kaziranga started providing him with saline drops for two months till he took his last breath on Monday morning of the given date just few days before his 34th birthday.

[ Also Read: Overview of the year 2017 for Kaziranga National Park ]

The strong rhino did not give up even after a fatal incident back in 2016 where the 33-year-old suffered from diarrhoea that led his rectum (anus) to come out. With a series of operations performed on him, the veterans were finally successful in reinserting the rectum. However, the struggle did not end for Bishnu, as later in the same year he started facing tooth decay. On witnessing him barely eating and simply ingesting the juice of plants, the team of Kaziranga National Park started providing him with saline drops. This continued for two months of suffering for Bishnu until he finally took his last breathe on the said date.

Bishnu died in much pain leaving the Kaziranga National Park and Assam’s neighbouring wildlife reservoirs in great grief. But, during his affliction, he was the major crowd pulling attraction in the park. The national park however is home to two offsprings of Bishnu, eldest one being a 14-year-old female and a young rhino 6-year-old male. Kaziranga National Park located in the east of Guwahati is one of the beloved wildlife destinations in India and is home to more than 2,400 endangered One-horned Rhinoceros.