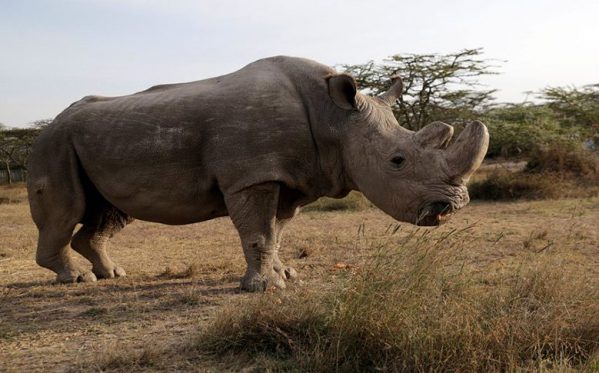 The whole world shed tears on the demise of the only surviving male Northern White Rhino named Sudan at the age of 45. The Northern White Rhino took his last breath at the Ol Pejeta Conservancy in Kenya where he was being treated for age-related complications along with a series of other infections on his right hind leg. But somehow the treatment resulted in worsening the condition for the Rhino causing him intense pain in the last 24 hours of his life. A group of veterinary doctors from the Ol Pejeta, Kenya Wildlife Service and Dvůr Králové Zoo surrendering to his issue made a group decision to euthanize Sudan relieving him from his misery. 19 March will forever be marked as the black day for all the wildlife reserves because this species is amongst the rarest in the wild and had been an important conservation project for years. But there is a hope since Sudan left two of his offsprings behind at Ol Pejeta, Najin, daughter and Fatu, the granddaughter.

The fact that the death of Northern White Rhino was predicted, it still stunned the world as Sudan was a hero for his species in the truest sense. The Rhino who in the 1970s voiced for the cause of protection of his kind was moved to the Dvůr Králové Zoo and back to Ol Pejeta Conservancy in the year 2009. The Rhino has endowed the World with two female rhinos who will be sheltered by Ol Pejeta. The Chief Executive Officer of Ol Pejeta, Richard Vigne said that the only hope to preserve this subspecies is through the use of vitro fertilisation (IVF) techniques. And this can be achieved by using the eggs of the two female Northern White Rhinos and the genetic material of the male rhino Sudan collected by Ol Pejeta in a hope to provide future reproduction and safe their kind of species.