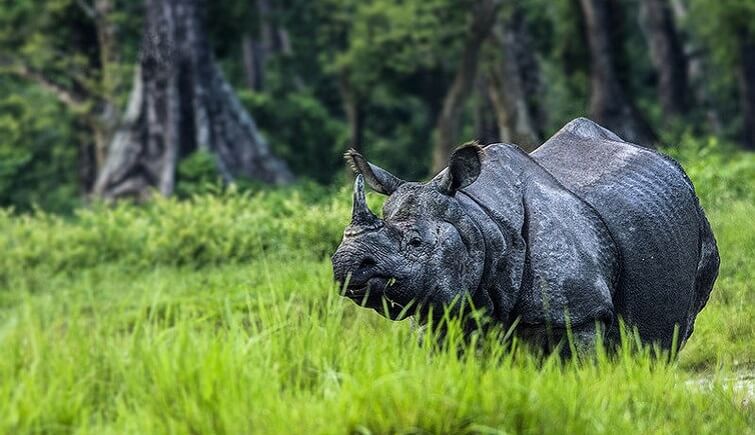 In case you didn’t know

Rhino or one-horned Rhino is a sub-species which is native to Indian sub-continent. Places on the IUCN Red List of endangered species, the Rhino population was on a constant decline. Once spread across the Gigantic plains, Rhino population today is limited to Assam and parts of West Bengal. However, despite limited to a handful of states, the existing population faced a constant threat of poaching.

The heart of the matter

A recent census was conducted to get an estimate for the Rhino population in India. Conducted after a period of four years, the February census stated that there has been a significant increase in the Rhino population across the two national parks in West Bengal - Jaldapara and Gorumara. From the census conducted in 2015, the number of Rhinos in Jaldapara increased from 204 to 231-237. In Gorumara, the numbers increased from 49 to 52. A slow-breeding species, the increase in number signifies a drastic improvement in Rhino conservation policies.

The conservationists all across the country praised and welcomed the new numbers, however, they raised concerns about the sex ratios in both the parks.

More about the census

The census conducted in February used the headcount method to detect the total population of Rhinos in both the parks. Conducted on February 15 and 16, the census involved more than 300 staffers of the park and NGO members. They also used 53 elephants, which were used by observers to conduct the survey. The entire area of 217 sq km was surveyed and observers were also posted at the boundaries of the park to detect if any animal was moving in and out of the ranges.

During the census, 231 Rhinos were directly sighted in the forest range of Jaldapara, which included 97 males (6 calves, 23 sub-adults and 68 adults) and 91 females (8 calves, 27 sub-adults and 56 adults). However, the sec of 43 Rhinos couldn’t be identified. Manish Yadav, assistant wildlife warden of Jaldpara was heading the count. He said that a total of 237 Rhinos were counted, however, officials believe that they might have counted 6 Rhinos twice.

In Gorumara National Park, the census was conducted over an area of 80 sq km and officials also surveyed the adjacent Chapramari Wildlife Sanctuary and forest reserves of Jalpaiguri. The survey here was conducted on 12th and 13th of February. Nisha Goswami who is the divisional forest officer was overlooking the entire exercise. In Gorumara, the officials counted 25 males (3 calves, 4 sub-adults and 18 adults) and 17 females (2 sub-adults and 15 adults). The officials couldn’t identify the sex of 10 Rhinos.

Apart from the manual headcount, teams from Wildlife Institute of India and WWF collected the dung samples of Rhino to help build a database of genetic signatures of individual Rhinos in both the parks. This is being done under the global Rhino DNA Indexing System, a.k.a RhoDIS Program. Samrat Mondol who is a scientist at WII said that under RhoDIS system, they will collect as many DNAs of individual Rhino from the wild to create a database. This would also include the Rhinos who are killed in cases of poaching. He also added that this database will help them to match seized Rhino contraband and provide substantial evidence in the court of law to ensure proper prosecution. He added that this system has already helped the courts prosecute 8 poachers alone in last one year.

Success yet with concerns

Although there has been a significant increase in the population, there are still some areas of concern. The biggest of them all is the number of male Rhinos in the park either equals or exceeds the female Rhino population. This pattern was observed even in the census of 2015. The experts claim that in order to maximise population growth and minimalise Rhino conflicts, the ideal male-female ratio should be one male per three females.

Raju Sarkar who is Assistant Divisional Forest Officer at Gorumara said that it’s a major concern as more males are being born in the area and this has resulted in the increase of animals straying and more fights are being recorded, some eventually leading to the death of Rhinos. But he claims that there is nothing they can do as it’s a natural process.

The increase in the total population has also raised concerns amongst the forest officials of both the parks. Due to the limited size of grasslands available for the Rhinos, there isn’t enough food for all the Rhino population in the parks. Both the parks also have a healthy population of Indian bison and numerous species of deer, who are also reliant on these grasslands for their survival.

What is grassland and how it a cause of concern?

Grassland is a natural phenomenon which is caused after floods but with the increasing human intervention by the building of dams and embankments have reduced the chances of floods. This has drastically reduced the grasslands in the region. The Western bank was believed to have completely dried off before the embarkments were broken.

Bibhab Kumar Talukdar who is Asia coordinator of the International Rhino Foundation said that although the increase of Rhino population is good news and certainly a positive step, now the state government should focus on the grassland management in both the national parks. He added that the parks have the capacity to hold at least 50 additional Rhinos if there is proper grassland management.

The threat of poaching

Poaching is still the single largest threat to the existing Rhino population across the globe. Hunted for their skin and horns, these Rhinos need special protection if we seek to preserve them for future generations to come. Kaziranga National Park in Assam which is home to the largest Rhino population has managed to ward off the threat of poaching. With orders of shoot at sight, Kaziranga has sent a strong message to illegal traders that Rhinos have got all the protection they need.

In Jaldpara, since 2015, there have been eight reported Rhino deaths because of poaching. In Gorumara, at least two Rhinos were reported to be killed by poachers. These Rhinos were killed for their horns. Although there has been a rise in the Rhino population, the cases of poaching cannot be overlooked.

The state government is proposing to create new habitat for Rhinos and we hope that the current Rhino population continues to grow.