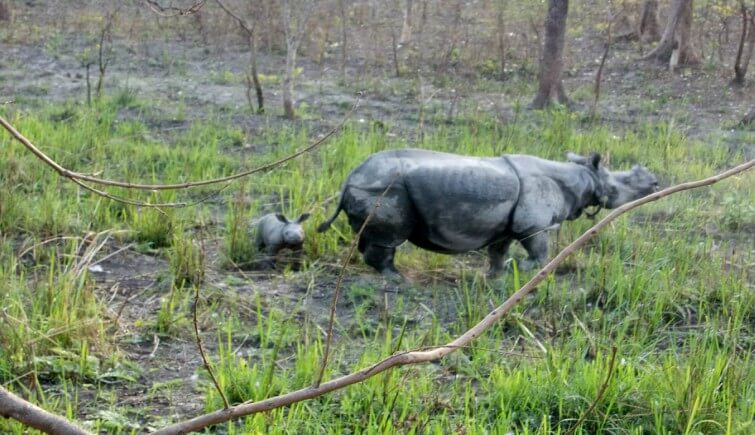 The Great Indian One-Horned Rhino Conservationists welcomed baby rhino at the Manas National Park (a UNESCO World Heritage Site) in Assam. The baby rhino was born of 4 January 2019 to six-year-old mother rhino R3A. Since the day the baby is born, the authorities have been documenting its movements.

The birth of a rhino calf is no less than a big win for the conservationists who consistently make efforts for the protection of the critically threatened one-horned rhinoceros species- ‘the pride of Assam.’ Even though the calf's gender is not yet known, but the initial observations made by the forest officials are of the view that both the mother and baby are doing well in the wild.

About R3A- the Rhino Relocation Project

R3A was born to Laisri in 2013, and seeing her become a mother is no less than a treat to eyes and ears.

During the course of rhino relocations that were being done in regard to the conservation strategy, Laisri was relocated to Manas from Pobitora Wildlife Sanctuary through the wild-to-wild translocation procedure. Adding to this, Deba Kumar Dutta, Landscape Coordinator (BHL, Manas Conservation Area), WWF-India and member of IUCN/SSC Asian Rhino Specialist Group, said Manas has gradually revived because of the rhino introduction process. It has been more than a decade since two male rhinos to Manas from Pobitora were translocated. Earlier than this, rhinos were brought to Manas in the year 2006 from the rehabilitation centre.

There have been a time when Manas was home to more than 100 rhinos but heavy poaching had wiped out the entire rhino population in the national park in the early 80s and 90s. To this, in the year 2005, the Government of Assam in association with International Rhino Foundation (IRF), the World Wide Fund for Nature (WWF), the United States Fish and Wildlife Service USFWS) and Bodoland Territorial Council launched the Indian Rhino Vision 2020 (IRV 2020). The project aimed to reintroduce rhinos by boosting the population to 3,000 by the year 2020 in the seven protected areas including the Manas National Park, Rajiv Gandhi Orang National Park, Kaziranga National Park and Pobitora Wildlife Sanctuary.

The silent initiative taken by the authorities in charge to revive the rhino population at the Manas National Park is worth praising and every birth in the park just like this one would make a difference. But this doesn’t end here. The rhino population along with other wildlife need a lot more attention from the wildlife conservationists and other individuals of the society.

Q: What is the population of one-horned rhinos?

Ans: The population of one-horned rhinos is around 3,500 in northeastern India and the Terai grasslands of Nepal with 2,413 alone in Kaziranga National Park of Assam.

Q: Why are rhinos hunted and killed?

Ans: Rhinos are hunted and killed for their horns which has high demand in Asia where they are used to make traditional medicines that cures cancer and many other health issues.

Q: What is the best time to visit Manas National Park?

Ans: Both summer (March to May) and winter season (October to February) are the best time to visit Manas National Park in Assam.

Q: What activities tourists can enjoy in Manas National Park?

Ans: Tourists on their visit to Manas National Park can enjoy Jeep Safari, birdwatching and more.