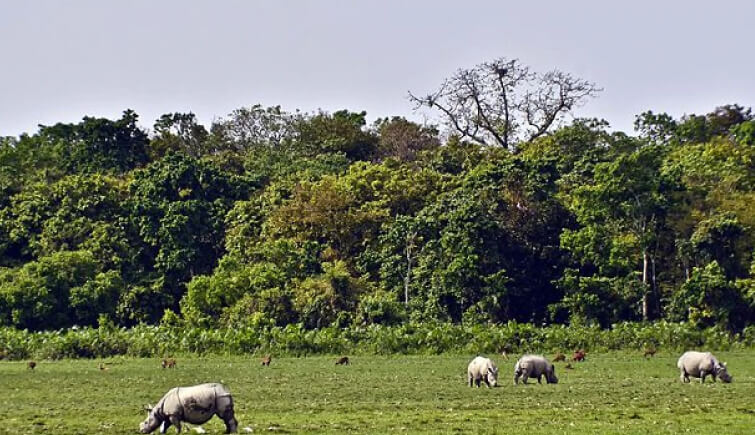 Kaziranga National Park and Tiger Reserve (KNPTR), a UNESCO World Heritage Site in Assam, famous for its one horned rhinoceros, has received more than 3,000 hectares, thus increasing its total area to 914 square kilometers. The new areas added to the park include those from where encroachment has been removed.

Which areas have been added to Kaziranga National Park?

The areas which have been added to Kaziranga National Park and Tiger Reserve (KNPTR) include 176 hectares at Deosur, Palkhowa in Deosur protected reserve forest, 307 hectares at Banderdubi, both of which are located in Nagaon district, and 2,570 hectares at Mokua Chapori, in Sonitpur district. These are the 7th, 8th & 9th additions to the park.

Why were the new areas added to Kaziranga National Park & Tiger Reserve (KNPTR)?

According to a release issued by the forest minister, Parimal Suklabaidya’s office, “It is a move to consolidate the wildlife areas anticipating better wildlife conservation and reduction in human-wildlife negative interactions in future.”

Some Facts about Kaziranga National Park: A National & Global Treasure!

Kaziranga National Park, a UNESCO World Heritage Site, is a treasure house of flora and fauna of all types. It boasts the highest number of one horned rhinoceros in the world, at 2,400 rhinos. Here are other interesting facts about it: It’s inhabited by Reticulated Python & Rock Python, two of the largest snakes in the world. Multiple species of large cats like leopards & Royal Bengal Tigers, call it their home. The grasslands found in Kaziranga bear a strong resemblance to those of Africa. According to the latest census, it also boasts the highest density of tigers in the world.