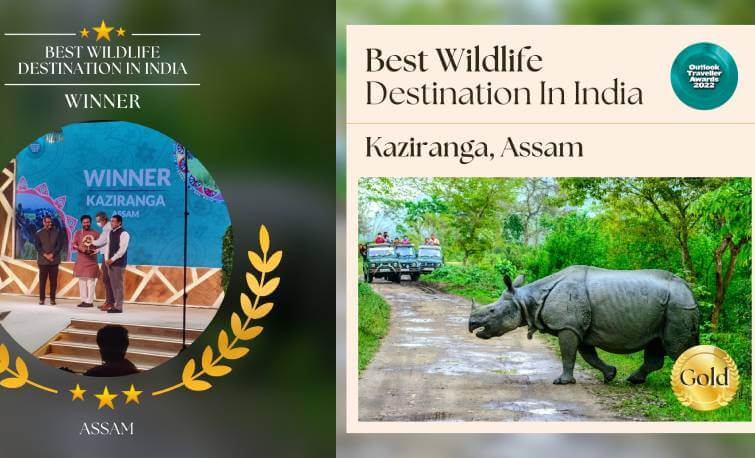 Kaziranga National Park and Tiger Reserve has been honoured with the ‘Gold Award’ for being the best destination in the category of wildlife tourism by Outlook Traveller. The award has been given at a function held in New Delhi on August 24 in front of a stellar jury, engrossing speakers and several tour operators, influencers, writers, designers and many more.

The news also has been announced on social media platforms like Twitter, where the tweet made by Outlook Traveller’s official handle states that the Gold Award for being the best wildlife destination in India was received by Shri Padmapani Bora, Managing Director, Assam Tourism Development Corporation and Shri Maninder Singh, Additional Chief Secretary, Assam Tourism.

Reportedly, four northeastern states in India have been felicitated for being the major contributors to promoting sustainable tourism in India.

Over the years, Outlook Traveller Awards has attracted people related to the travel and tourism industry in India. This year, the goal was to examine the changes in the travel process, which has become the ‘new normal,’ especially, after the pandemic and discuss the innovations that have been created in this period.

As per reports, besides these four northeast states, several other states and union territories have been awarded for their contribution to the travel industry. The awards are:

As mentioned, the programme was held in New Delhi on August 24 where the chief guest was Shri G. Kishan Reddy, the Union Minister for Culture, Tourism & DONER. The Jury Chair was appointed to Meenakshi Sharma, Deputy Comptroller & Auditor General, Government of India. And the Jury Team was presented by five members: